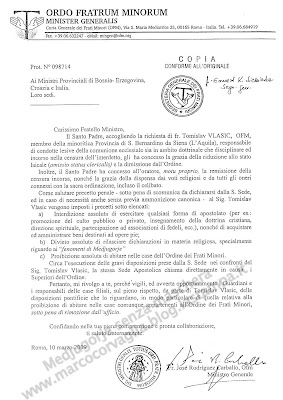 To the Provincial Ministers of Bosnia-Herzegovina, Croatia, and Italy

The Holy Father, accepting the request of friar Tomislav Vlasic, O.F.M, member of the province of friars minor of St. Bernardino of Siena (L'Aquila), responsible for conduct harmful to ecclesial communion both in the spheres of doctrine and discipline, and under a censure of interdict, has granted him the favor of reduction to the lay state (amissio status clericalis) and of dismissal from the Order.

In addition, the Holy Father has granted the petitioner, motu proprio, the remission of the censure incurred as well as the favor of dispensation from religious vows and from all the responsibilities connected with sacred ordination, including celibacy.

As a salutary penal precept - under the pain of excommunication which the Holy See would declare, and if necessary, without prior canonical warning - the following precepts are imposed on Mr. Tomislav Vlasic:

a) Absolute prohibition from exercising any form of apostolate (for example, promoting public or private devotion, teaching Christian doctrine, spiritual direction, participation in lay associations, etc.) as well as of acquiring and administering goods intended for pious purposes;

b) Absolute prohibition from releasing declarations on religious matters, especially regarding the "phenomenon of Medjugorje";

c) Absolute prohibition from residing in houses of the Order of Friars Minor.

For the execution of the serious measures imposed by the Holy See regarding Mr. Tomislav Vlasic, the same Apostolic See calls directly on the Superiors of the Order.

Therefore I turn to you, so that you make sure to instruct the Guardians and superiors of friaries about full compliance, by Tomislav Vlasic, with the pontifical measures regarding him, in particular relative to the prohibition of residing in any houses belonging to the Order of Friars Minor, under pain of removal from office.

Trusting in your full understanding and prompt cooperation, I greet you fraternally.
Rome, 10 March 2009.

Thanks to Richard Chonak of Catholic Light for his translation of an exclusive at the blog of Marco Corvaglia (Italian), "Medjugorje senza maschera" (Medjugorje without mask) , in this blogpost.