2005 Article about Cardinal Bertone on Medjugorje - Is he a skeptic?

This is a partial translation from Italian of an article which ran in Corriere in 2005 (original source).  In it, we learn about an experience that Cardinal Bertone had with angry "Medjugorjeans" after he dared to voice his own skepticism.

...the ultra-Marians who heard him speak on Bruno Vespa's "Door to door" a few evenings ago weren't happy to hear his skepticism about the apparitions of Civitavecchia and Medjugorje, and fired back point-blank, by mail or the microphones of God: "Unseemly and offensive reactions of faithful and priests who describe themselves as 'Medjugorjean'", the Cardinal censured on Monday: unacceptable attacks "even from Radio Maria, certainly not compatible with the promoters of authentic Marian devotion".


Probably no one would have noticed the dispute, if Bertone had not decided to make it public. "A priest was first to point out what happened Friday evening on Radio Maria," the archdiocese explained. At 9 p.m., ninety minutes live with listeners, with the director of the much-followed Marian station, Fr. Livio Fanzaga... "Bewildered" is the most frequent word from the speakers: how is it possible that an archbishop goes on Rai Uno to say, for the Church, at this moment, there was no supernatural event at Civitavecchia or at Medjugorje either? In reality, Bertone knows what he's saying: Ratzinger's right hand, professor of canon law, and prelate, sent by the Pope to Fatima for Sr. Lucia's funeral, he's followed all the investigation on the apparitions in Herzegovina, and knows the story of the statue of Mary weeping blood in Lazio. He doesn't deny the right to pray to the Virgin in places where she's not present, but he "deplores the excesses of fanaticism, such as the events in various churches, in which they promise the possibility of being present at an apparition of the Madonna on March 18 at a scheduled time".


The clouds burst. The devotees of miracles break out on the radio and in two weeks of mail to the curia in Genoa: "We don't agree in the least with what was said about the apparitions being programmed like a show" (Aldo); "Bertone said he never met the seers in person, or least not to his knowledge" (Efisio); "Cardinal Bertone wasn't clear about anything"; "the journalist Socci knows more about it than him"; "the place to make such arguments isn't a TV set: I don't think Vespa's show is the Cathedral of St. Peter" (salomone@mediacomm.it)... On Civitavecchia they brought in a former bishop, Girolamo Grillo, who commented venomously: "If Bertone had read my dossier, he would have learned that I never spoke of supernatural events or inexplicable events, so that the Archbishop of Genoa would have to take the lid off the hot water".

In faithful Genoa, they're with the archbishop, even among the rebellious priests unpopular at the curia. "The Doges dedicated their acts to the Madonna; the Virgin was crowned here as 'Queen of the City'," says Fr. Andrea Gallo, friend of De André and of the poor. "But the tradition is more sober: to the Madonna della Guardia, where there was an apparition, the Genovese came secretly, preferably by night. I haven't been to Lourdes either, not at all. The cardinal is right to take this up with Radio Maria: they're hammering away at propaganda; it's a crusade. But what do we expect to get from it? If I tell young people to use a condom, I'll be hauled in front of an ecclesiastical court. If they use the Madonna to ask for money, nobody does anything. That station is a hot potato. It's not the voice of Mary, because it benefits from a certain fanaticism, a little like the /maghetti/ on TV who get rich off people's suffering". Less severe is Fr. Gianni Baget Bozzo, a collaborator of Radio Maria: "The Church is not obliged to accept a miraculous fact, and regarding Medjugorje, Bertone is saying the legitimate things that the bishop of Mostar also says. It's too much that they are so attached to it. But they are right to some extent..." Who? "The people who go to Medjugorje or Civitavecchia. Probably it's not really true. But why discourage people who basically just want to pray to Our Lady?" 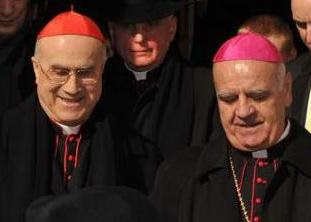 Cardinal Bertone (left) with Bishop Peric in Mostar in January 2010
Many thanks to Richard Chonak for this translation.