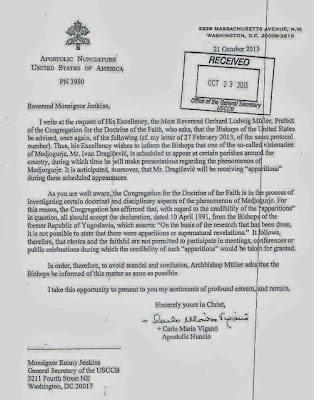 Here is the above letter, typed out in html.

I write at the request of His Excellency, the Most Reverend Gerhard Ludwig Müller, Prefect of the Congregation for the Doctrine of the Faith, who asks, that the Bishops of the United States be advised, once again, of the following (cf. my letter of 27 February 2013, of the same protocol number). Thus, his Excellency wishes to inform the Bishops that one of the so-called visionaries of Medjugorje, Mr. Ivan Dragičević, is scheduled to appear at certain parishes around the country, during which time he will make presentations regarding the phenomenon of Medjugorje. It is anticipated, moreover, that Mr.Dragičević will be receiving "apparitions" during these scheduled appearances.

As you are well aware, the Congregation for the Doctrine of the Faith is in the process of investigating certain doctrinal and disciplinary aspects of the phenomenon of Medjugorje. For this reason, the Congregation has affirmed that, with regard to the credibility of the "apparitions" in question, all should accept the declaration, dated 10 April 1991, from the Bishops of the former Republic of Yugoslavia, which asserts: "On the basis of the research that has been done, it is not possible to state that there were apparitions or supernatural revelations." It follows, therefore, that clerics and the faithful are not permitted to participate in meetings, conferences or public celebrations during which the credibility of such "apparitions" would be taken for granted.

In order, therefore, to avoid scandal and confusion, Archbishop Müller asks that the Bishops be informed of this matter as soon as possible.

I take this opportunity to present to you my sentiments of profound esteem, and remain,

Sincerely yours in Christ,