2007: Bishops of Tuscany advised by CDF to read 2006 homily of Bishop Peric 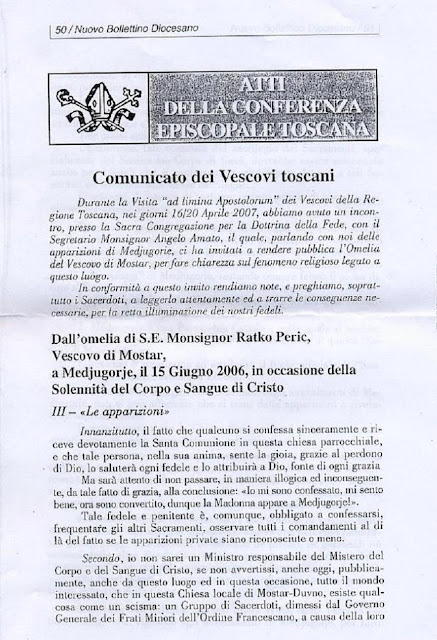 In his June 2009 homily for Confirmations at Medjugorje, it was widely reported that Bishop Peric said:

I also visited the superiors of the Congregation for the Doctrine of the Faith and thanked them in particular for informing the bishops of the region of Toscana, in Italy, who had asked the Congregation during their “ad limina” visit what position to take regarding the phenomenon of Medjugorje. The then Secretary of the Congregation, Archbishop Angelo Amato recommended that the bishops convey to the priests and faithful of their dioceses the homily that was given here in Medjugorje during the rite of Confirmation, on the solemnity of the Body and Blood of Christ in the year 2006, which they then did.

This was disputed by supporters and promoters of Medjugorje because there was no proof.

The above is the notice released by the Bishops of Tuscany asking priests to share the bishops 2006 homily.  Here is a crude google translation:

During the visit "ad Limina" of the Bishops of the Region of Tuscany, in the period 16/20 April 2007, we had a meeting at the Sacred Congregation for the Doctrine of the Faith, the Secretary Monsignor Angelo Amato, who speaks to us of apparitions of Medjugorje, has invited us to make public the homily the Bishop of Mostar, in order to clarify the religious phenomenon linked to this site.

In compliance with this invitation to make known, and pray, especially priests, to read it carefully and to learn the lessons necessary for the proper enlightenment of our faithful.

That which was said in the 2006 homily was very strong and many statements can be found on promoter sites saying "the bishop was removed" from the Vatican.  This is patently false and deceptive.  The above proves that the CDF is working with the Bishop of Mostar as one would expect.  A further explanation about why the matter was taken up by the bishop's conference, then commissions is detailed here.