June 10, 2004: Excerpt of Confirmation Sermon by Bp Peric in Medjugorje

With the official announcement of a new commission on the phenomena of Medjugorje, we will continue to accumulate, publish, and examine closer, existing documents for informational purposes.

This excerpt from the June 10, 2004 homily at the parish of St. James in Medjugorje has only been available in Croatian at the Diocese of Mostar-Duvno website, until this private translation was made at my request.

Recall first, what the 1991 Zadar Declaration said about the local bishop:


Yet the gathering of the faithful from various parts of the world to Medjugorje, inspired by reasons of faith or other motives, require the pastoral attention and care, first of all, of the local Bishop and then of the other bishops with him, so that in Medjugorje and all connected with it, a healthy devotion towards the Blessed Virgin Mary according to the teachings of the Church may be promoted. The Bishops will also provide special liturgical and pastoral directives corresponding to this aim. At the same time, they will continue to study all the events of Medjugorje through the commissions.

A few points from the above paragraph:


1) It gives to the local bishop, the lead in giving this "pastoral attention and care", and "then the other bishop's with him".

2) It is not only in reference to what happens in Medjugorje, but "all connected with it".

3) The declaration talks about a"healthy devotion towards the Blessed Virgin Mary according to the teachings of the Church."

4) It makes clear the authority of the bishops to set pastoral and liturgical directives, "corresponding to this aim".

In this homily, Bishop Ratko Peric talks about Marian devotion and the Church's teachings on it.  He speaks fervently about the Eucharist as the greatest miracle.  He weaves together the relationship that Mary has with Christ and the Church.

Emphases mine in bold. Links were added by me, as well.

Excerpt from Confirmation Sermon by Bp Peric in Medjugorje June 10, 2004 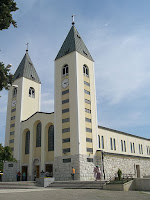 3 - This parish church of St. James the Apostle in Medjugorje should be a place of great veneration of the Eucharist and the other sacraments of Christ. But all those pictures, images and words, which connect unapproved private accounts with the holy things of God or that refer to unapproved and unproven apparitions or to the private assurances which have already for 23 years played with and manipulated the “Queen of Peace”, must be removed from the church and from church usage.

The Blessed Virgin Mary is the greatest servant of God. And she is also in the service of Jesus Christ from his conception to his ascension. About her the Catholic Church has its own dogmas of faith, theological truths, teachings expressed in ecumenical councils and in the ordinary magisterium of the Church. And the Exhortation of Paul VI from 1974. - Marialis Cultus - "To Honor Mary”, and the encyclical of Pope John Paul II from 1987. - Redemptoris Mater - "Mother of the Redeemer," present the entire and correct Catholic doctrine on Our Lady, which the Church celebrates and sets in front of our eyes with all its dignity and honor! Not a single preacher can present to the people, either by examples or content, so-called messages and accounts taken from unapproved private apparitions.


It is not allowed from this altar, nor is it allowed from any altar in the Catholic world, in place of safe Catholic doctrine, to refer to the alleged messages and apparitions, which even after the canonical commissions of investigation are neither proven nor accepted by the Church.


The faithful are called by Catholic faith to adhere with confidence to official church doctrine, and not one of them is obligated to accept the unapproved private accounts that daily come from the alleged visionaries, who have promoted their apparitions around the world.


Being responsible, the Church cannot conform to irresponsible news that confuses and frightens the people of God, that presents the alleged apparitions with their visionaries and messages sensationally, and incompetently calls this place a sanctuary. We have a right to the seriousness and the dignity of our holy Catholic faith and we are obligated as genuine believers of Christ to keep the authentic teachings, without ever privatizing the one, holy, catholic and apostolic Church, or the Mother of the Church, the Blessed Virgin Mary!

The Body of Christ is the greatest gift of the Lord to His believers. When giving Holy Communion the priest says “The Body of Christ” and the communicant confirms it with “Amen”, confessing faith in Jesus' greatest miracle. Next to such a clear doctrine, divine message and miracle, is it really necessary to hop all over rocky Herzegovina for the tens of thousands of questionable "apparitions" throughout these 8,400 days? How is that taking our holy Catholic faith seriously?

The fundamental message of Jesus is “This is my Body! Take and eat. This is my Blood! Take and drink! Do this in remembrance of me! The mystery of faith!” Can there be a greater message than this that the Church makes present in every Holy Mass in every part of the world already for two thousand years? From the behavior of some individual believers and priests one gets the impression that the Most Blessed Eucharist and the sacraments are in the service of countless "apparitions", not one of which the Church has ever confirmed. And as though someone who goes to confession and receives Holy Communion here, is thereby proving the authenticity of private apparitions. A true believer, priest and bishop, must not forget the Apostle’s warning that the time will come when people will “accumulate teachers for their itching ears who turn them away from hearing the truth to following myths”.(2 Tim 4, 3-4)

Mary, like her Son also, is characterized most of all by obedience to God. How then and to whom is it allowed frivolously to play games with the Most Blessed among women, the Mother of God? How is it that people have no fear of God? And priests by-passing the Church, who accept such "apparitions" as authentic and bring them not only into the devotion of Our Lady’s Rosary, but even into homilies, and liturgical ceremonies, or they organize "pilgrimages" presuming their authenticity, giving proof not only that due ecclesiastical seriousness does not oblige them but showing themselves to be disobedient sons of the Church. The saints of God became saints because they obeyed the concrete Church of Christ, and did not work according to their conceited ideas and self-will. [private translation by Fr.Philip Pavich OFM]

When Bishop Peric mentions priests who, "organize 'pilgrimages' presuming their authenticity", we have to look back again at several documents.

Prior to the 1991 Zadar Declaration, the former head of the Yugoslav Bishop's, His Eminence, Cardinal Franjo Kuharic, when announcing the new commission in 1987 in the Glas Koncila (Voice of the Council), explained:

While waiting for the results of the Commission's work and the Church's verdict, let the Pastors and the faithful honor the practice of the usual prudence in such circumstances. For that reason, it is not permitted to organize either pilgrimages or other religious manifestations based on an alleged supernatural character attributed to Medjugorje's events.


"The result from this, in what is precisely said, is that official pilgrimages to Medjugorje, understood as a place of authentic Marian apparitions, are not permitted to be organized either on the parish or on the diocesan level..."


Finally, as regards pilgrimages to Medjugorje, which are conducted privately, this Congregation points out that they are permitted on condition that they are not regarded as an authentification of events still taking place and which still call for an examination by the Church.

Both protocol letters can be read in this post: Are pilgrimages permitted or not???

One of the best assessments made in reference to this langauge, was that of Msgr. Henri Brincard of Puy-en-Velay and "Accompanying Bishop of the Association of Marian organisations", writing on behalf of the French Bishops in a statement that first appeared in the official bulletin of the French Episcopal Conference [SNOP], No. 1,064, [printed in Documentation Catholique of 7 January 2000].  See entire document online, in English here.


"I do not see how I can go to Medjugorje without giving my support, by the very fact of my having come there, to the events who's discernment and assessment rests henceforth with the Episcopal Conference of Bosnia-Herzegovina. Such support would fly in the face of a traditional teaching of the Church, recalled in Lumen Gentium and applicable to all the successors of the Apostles (11): "Individual bishops, in so far as they are set over particular Churches, exercise their pastoral office over the portion of the People of God assigned to them, not over other Churches nor the Church universal."